You're probably expecting me to weigh-in on the Patrick Reed kerfuffle but it feels like everything that needs to be said has been said and then some. Let's just say that when everyone you play with on a regular basis identifies you as the cheater, you may want to call the rules official over BEFORE you move your ball to a different spot five feet away without marking where it landed. It's the same reason that people who hang-out with Winona Ryder remind her to pay for clothes BEFORE she takes them out of the store. You just don't want to give the wrong impression.

Here is the full video of the "incident" and let's just say that Reed is lucky he got a rules official who clearly looked like he was more into driving the golf cart than enforcing the rules. Combine that with the fact that the ball barely bounced high enough to embed in a bowl of yoghurt, and what you get is just the latest chapter in a biography that no one will ever want to read.
TWEET OF THE WEEK

If his opening "we're going to bite a kneecap off" press conference is any indication, the Dan Campbell era in Detroit is going to be a glorious one year oil rig fire. 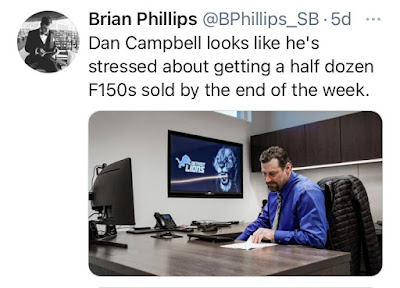 GOLF ANALYIS FOR THE CRIMINALLY BORED
It feels like this should be an easier tournament to forecast considering the handful of players who consistently get it done at TPC Scottsdale. When everyone is on their respective games, you start by locking-in Rickie Fowler and Hideki Matsuyama. Then add Matt Kuchar and maybe Chez Reavie and/or Martin Laird. With that foundation in place, you just need to add pieces like Gary Woodland, Bubba Watson and Billy Horschel. Boom.
Two problems with that approach now: (1) Rickie and Hideki are currently playing at a level somewhere between "meh" and "like shit; and (2) now you have all of these new guys who are clearly very comfortable here and, more importantly, much better golfers. If you give me Jon Rahm, Justin Thomas, Xander Schauffele, Rory McIlroy and Webb Simpson with the option to pick just two of them, I'm pretty sure my chance of being correct would be 40%. Then again, I was an English major with an emphasis on romantic poetry (as if this blog didn't make that obvious).
I'm going with Thomas and Simpson based on a recipe of current form, past performance and hunch. Also, Rahm really let me down last week and I am nothing if not petty and vindictive. The relatively high priced guy I have a really good vibe about is Daniel Berger. Solid track record here and he's only had one bad week since October of 2019 which is certainly more than I can say for myself.
Either Bubba or Gary Woodland is going to have a good week so I'll pick both of them knowing that I'll only be half right. Max Homa keeps justifying our faith in him and humanity. Conversely, we'll also go with Matt Kuchar for none of those reasons but just because he always plays well in Scottsdale.
Brendan Steele used to be a lock here when he was playing well and now he's coming-off T4-T21 finishes in his last two tournaments. As for the deep sleepers, I really have no idea. Kyle Stanley seems to make sense based on his recent form and the fact that he won here in 2012. Of course these are the things you tell yourself when trying to justify picking the 224th ranked player in the world.
One and Done Pick: Justin Thomas
Other Guy I'd Pick: Daniel Berger
Sleeper Pick: Kyle Stanley
DraftKings Top Ten Values
THE WAITER DOESN'T NEED TO KNOW YOUR NAME
HISTORICAL PERFORMANCE CHART
This week's chart is named in honor of my mother in-law and all of my friends who love to build a strong rapport with the waiter. As a former waiter, I can assure you that we forget your name before you finish saying it. But thanks anyway.
Other players worth noting if past performance is your thing include Ben An, Charley Hoffman and J.B. Holmes. Three players who I believe have led the Masters on Thursday and I know have never been in my kitchen.*

Footnote
* Our periodic homage to Cliff Clavin's epic run on Jeopardy.
Email the Fantasy Golf Report at fgr@fantasygolfreport.com.
Posted by Ronny Elliott at 10:18 AM