I'm going to try to write this while "participating" in my son's Zoom college counseling night so it's a race against time to finish this before I turn the gas on the stove and start taking deep breaths. For those who have not endured this process yet, I can tell you that it might be worse the second time around because you've heard all of the earnestly delivered useless information before and no one thinks they have more important things to say than the assistant dean of admissions at a marginally above average liberal arts college. It's like spending hundreds of hours and thousands of dollars to send your kid to Fyre Festival for four years in the hopes that they'll end-up with the next Mark Zuckerberg* as their roommate.

And of course the tour guides are just future members of the admissions team . . . 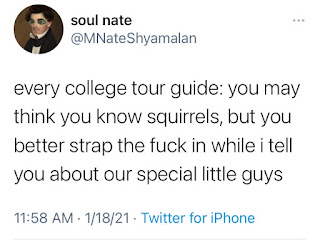 GOLF ANALYSIS THAT REALLY TRIGGERS THE SENSES
We get our first full field kick-ass line-up of the season and I am all here for it. I don't know about you but I'm relying more and more on sports to fill my entertainment voids and, despite my traditional love of college and pro basketball, it doesn't even feel like they exist right now. I heard Dick Vitale shouting about something the other day and reflexively yelled at Alexa to shut the fuck up.
So thank god for golf and bring on Rahm and Rory and Xander and even Patrick Reed for chrissakes. The Farmers usually delivers the goods and is on a great recent run of winners that include Rahm, Justin Rose, Jason Day, Marc Leishman and Brandt Snedeker. I expect the same this year with at least one of the young studs like Matthew Wolff, Scottie Scheffler or Viktor Hovland being heavily involved.
It's impossible not to pick Rahm based on his track record. The moment you even think about it, you just picture him at the top of the weekend leaderboard and think "don't be a fool." Same for Tony Finau who is a virtual lock for a top ten even if he has no chance of winning. As for the youth movement, I'm going with Wolff who has been playing like crap lately which is no indicator for him as his last win was preceded by a run of T50 . . . T80 . . . MC. He just feels due.
Leishamn and Day are the light versions of Rahm. And Gary Woodland is a great fit for this place as evidenced by his four consecutive top 20's before missing the cut last year. As noted last week, I'm riding the Talor Gooch train to its final destination whether that be a win or a slew of missed cuts (so far so good with a T21 last week). And I just pick Max Homa any chance I get because it's impossible not to root for Max Homa.
As for the bargain guys, Tom Hoge has a real affinity for these courses and, I know I'll hate myself for it later but I can't resist taking J.B. Holmes at a place where he's contended in the past even if he's a missed cut waiting to happen.
One and Done Pick: Jon Rahm

Other Guy I'd Pick: Matthew Wolff

All kinds of good intel in this week's chart if you believe in past performance. From Brandt Snedeker to Patrick Rodgers, there are plenty of guys who find new life at Torrey Pines. Only question is whether they'll find it this year.
THE LARRY KING MEMORIAL**
HISTORICAL PERFORMANCE CHART
Footnote

* True story that the first two times I typed that name it came out as "Suckerberg" and then "Fuckerberg" and you will never convince me that someone at Google doesn't snicker every time that happens.
** If you're in the mood for a classic Larry King moment, click here.
Email the Fantasy Golf Report at fgr@fantasygolfreport.com.
Posted by Ronny Elliott at 12:52 PM