This week's late preview excuse is the fact that I attended the Eagles concert last night along with about 20,000 fellow inhabitants of the assisted living on-deck circle. (I'm actually only sitting in the dugout waiting to pinch-hit but the joke worked better with on-deck circle . . . to the extent that it worked at all). Anyway, the place reeked of Aqua Velva, medical marijuana and Grecian Formula 45 and no more than 23% of the crowd was able to stand-up at any one time. Even when they started playing Life in the Fast Lane which made for the most mismatched song/audience combination since the last time Rod Stewart performed Tonight's the Night for a "live" audience.
I will, however, hand it to the Eagles because once you get past Don Henley's raging ego and their slew of sappy ballads, they put on a great fucking show for a bunch of geezers. Vince Gill (doing his best Higgins from Ted Lasso impression) joined them to effectively create a wall of four to six guitars at the front of the stage and they just churned-out one hit after another that made you smile. Even when Joe Walsh's vocals on Life's Been Good fell about five seconds behind the beat, the crowd picked him up to the point where it didn't matter because everyone there was just so happy to be alive. At least for now.
TWEET OF THE WEEK
By this logic, I should have more friends. 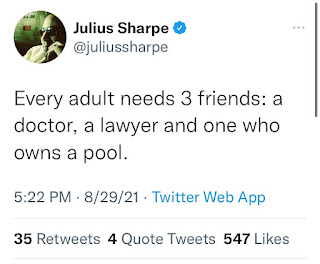 GOLF ANALYSIS FROM THE NEW TORNADO ALLEY*
This will be the third year of what I like to call the "Shit Format" (actually I just made that up) and let's be honest, it sucks for wagering. The DraftKings salaries are all out of whack and if you saved a stud like Xander Schauffele or Rory McIlroy, you now have to watch them start 8 shots back.
I'm down to some serious scraps. Saving Collin Morikawa seemed like a brilliant maneuver a little over a month ago but since the Olympics he's been on a downward spiraling run of T26 - MC - T63. My other options are basically Sam Burns and Jason Kokrak and by basically I mean they are my other options. You can add to my woe the fact that I just dropped-out of first place in this league I am desperate to win thanks to Brooksie's choke job at Caves Valley. Wait, can I get thrown-out of my own blog just for writing that?
I'm going to say I'm picking Sam Burns and maybe I am but maybe I'm not (wink wink nudge nudge). If I had access to the entire Tour Championship buffet, I'd go with either Jon Rahm or Justin Thomas and Rory would be my darkhorse but 8 shots? Fuck me.
As usual I like Scottie Scheffler to exceed expectations and you know the real Brooksie would like nothing more than to make-up those five shots on his wannabe nemesis so he's a solid bet. Daniel Berger and Billy Horschel as deep sleepers are total flyers but, if this tournament got what it actually deserved, Stewart Cink would have an out of potato body experience and walk away with the $15M.
One and Done Pick: Sam Burns
Other Guy I'd Pick: Jon Rahm
Sleeper Pick: Scottie Scheffler
DraftKings Top Ten Values
I'm not sure how much value you can derive from 2019 and 2020 because they were both played using the Shit Format but hey, I'm just here to provide the information so you can do you.
HISTORICAL PERFORMANCE CHART
FOR THOSE WHO TRIED TO HIT THE HIGH
NOTE ON "TAKE IT TO THE LIMIT" LAST NIGHT
Footnote
* I'm writing this under a tornado watch. Just outside of Baltimore. I thought when I agreed to live in this hellhole that there were to be no tornadoes, earthquakes or plagues. None of this was covered in the fucking brochure.
Email the Fantasy Golf Report at fgr@fantasygolfreport.com.
Posted by Ronny Elliott at 7:58 PM No comments: