Hey how about that 2020 am I right? If only we had only known that the lady in the Peloton commercial who got the bike for Christmas was a witch, we probably would've left her alone. Instead we pissed her off and now look at us. All riding bikes in our basements and and gazing at Netflix like a bunch of zombified toddlers watching Baby Einstein videos on a loop. We're really really sorry Peloton witch lady . . . can we please please go back to the gym and Applebee's now? Because goddamn I do miss eatin' good in the neighborhood.

Anyway, a year this fucked-up definitely deserves a recap and I may not be just the guy to do it but I'm going to be one of the guys who does it. I believe I can bring a unique perspective to this because (a) I have my own perspective on it, and (b) I'm the only one who has my perspective thereby making it unique by definition. (These are the kinds of things that people who've been living on a desert island say right after they marry and subsequently divorce a palm tree over irreconcilable differences about how to raise the kids).

If this goes the way I have it planned, we'll delve into some golf, a little entertainment and of course my personal travails. Basically a little song . . . little dance . . . a little seltzer down the pants. (All credit to The Mary Tyler Moore Show).

Let's jump right in and take it month by month starting in January which seems like five years ago considering that we could still go bowling and get tattoos in states other than Florida back then. This is Part 1 and it will cover three months. It will hopefully be followed by subsequent posts that carry us all the way through December but, based on my history of multi-part efforts, we'll be lucky to make it to mid-September.

Instead the Ravens threw the ball 59 times and ran it 29 times in a 28-12 loss to the Titans while letting Derrick Henry relive his high school glory days of running over future mattress salesmen. These statistics seem relevant because the 2019 Ravens ran for 3,296 yards in the regular season which made them, let's see here . . . the greatest rushing team in NFL history. It's ok (audibly grinding teeth). I'm totally over it. 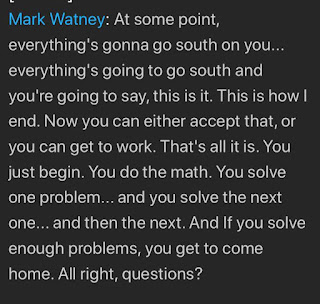 Seems like an appropriate place to take a break because the wine and the edible are currently colliding and we don't want it to get weird(er). The good news is that it only took me two weeks of writing and editing for this post to meet my high publishing standards so we'll see you back here for Part 2 sometime in mid-January. In the meantime, let's try to get through this by staying civil and only mocking people behind their backs.
Email the Fantasy Golf Report at fgr@fantasygolfreport.com.
Posted by Ronny Elliott at 7:38 PM No comments: