Because everyone needs some entertainment on these bland uneventful Wednesdays, I've decided to crank-out a brief preview of this week's professional golf tournament. You're welcome for the distraction.
TWEET OF THE WEEK
A very local and inside tweet for what is in essence a very local and inside website. Trust me. This is some funny shit that needles just the right people in just the right way. 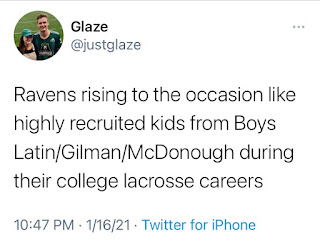 Anytime you're trying to pick a golf tournament recently won by Andrew Landry, Adam Long, Hudson Swafford and the ball striker formally known as Jason Dufner, you are definitely wandering about on some shifting tectonic plates. But that's the job. So here we go.

Let's get the obvious ones out of the way first. You have to factor Adam Hadwin and Andrew Landry somewhere into your equation because they're more comfortable in La Quinta than Mike Pence will be at the forgotten VP happy hours with Dan Quayle and Walter Mondale (note my effort at bipartisanship there . . . the healing starts now). You could almost say the same about Phil Mickelson based on his two recent runner-ups but he seems a little flaky lately (a little?) so I'm staying away this week.

None of the high dollar guys have torn this event up with a bunch of top tens which makes it even more of a crapshoot. With that being the case, I'm going to double-down on Patrick Reed who disappointed at the Tournament of Champions and I'm going to TRIPLE-DOWN on Sungjae Im who disappointed even more at the Sony Open. In financial terms this is called "riding your losers" and I believe it is widely regarded as sound investment strategy.

This event feels like the perfect place for a guy who's overdue to make it happen and right now no one may fit that description better than Abraham Ancer who is ranked 26th in the world based on a shit ton of quality finishes but no wins. In the last three years here he has finished 76th, T18th and 2nd which I believe in financial terms is called a "trend" and leads to a guarantee of future positive performance based on past results. Feel free to confirm all of this advice with a licensed professional.

My other five picks are pretty chalky but I do have a good feeling about Talor Gooch who is currently the FGR's "man he's going to pick that guy every fucking week until he does something isn't he?" guy. Feel free to substitute Brian Gay or Vaughn Taylor for Martin Laird because they're all effectively the same player for gambling purposes.

One and Done Pick: Abraham Ancer

As noted above, we don't have a lot of highlighted squares at the top of the chart mainly because the higher ranked players apparently don't like hanging-out in towns where a large segment of the population wear golf shoes to The Olive Garden. I guess they think they're too good for us. And besides, they're spikeless shoes and I'm too drunk to change into my flip-flops.
THE LA QUINTA JUST FAR ENOUGH
FROM THE AIRPORT TO GET SHOT
HISTORICAL PERFORMANCE CHART

Email the Fantasy Golf Report at fgr@fantasygolfreport.com.
Posted by Ronny Elliott at 1:54 PM