Golf is back and just in time to give me something easy to write about as I try to manufacture the rest of my ill-fated 2020 year in review which turned-out to be pretty thin about halfway into April. It'll get done. It may take until the middle of this April but it'll get it done. Probably. (Maybe).

We actually have a banner weekend of sports coming-up between the golf, NFL playoffs and the NCAA FBS BCS STFU LMFAO National Championship game. Some of you kids out there might be interested to know that there was a time when more than four different teams actually had a chance of winning this thing. Even Notre Dame. No really.

From your lips to God's ears Counting Crows . . . 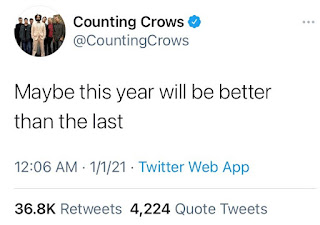 The primary question this week is which "no fucks to give" version of Dustin Johnson are we going to get. Is it going to be the "I don't give a fuck how I play and I'm fine finishing tied for 8th" version or is it going to be the "fuck it I can beat this field by three shots if I want to so I'm going to go ahead and beat them by five." I'm banking on the latter. Now D.J. has had a taste of lion he's thinking "you know what, lion tastes good."

As for the other favorites, you have to pick Xander Schauffle. It's a rule. And because 2020 is clearly dragging its stink into 2021, we're going with Patrick Reed. I had a strong temptation to give Bryson a spot because he should be able to bomb it around this place with impunity but I don't want to hate myself that much this week.

This would appear to be Hideki Matsuyama's favorite course outside of Arizona as he's finished top five the last three times he's played it. And Colin Morikawa barely gets the nod over Tony Finau and Daniel Berger on a hunch. Same with Sungjae Im over Cameron Smith and Joaquin Niemann.

More on the value guys in the Historical Performance Chart preamble because I had nothing else to write there.

THE DIABOLICALLY MUTATING
HISTORICAL PERFORMANCE CHART
Not a ton of information to glean from this week's chart but definitely worth noting are Marc Leishman's recent T4 and T7 along with Cameron Champ and Lanto Griffin's respectable outings. The course would seem to suit both of those guys. We'll go with Martin Laird as our bargain guy based on his tie for 4th at Kapalua . . . in 2010.

Posted by Ronny Elliott at 1:35 PM