Kind of a good news/bad news situation this week. The good news is that this year's tournament will be played without amateurs. Thus we will be spared two hours of complete yo-yo time on Saturday with golf commentators making fools of themselves trying to be some kind of cross between red carpet sycophants and peripheral posse members of "B" level celebrities. Phillip Seymour Hoffman's character in Boogie Nights carried himself with more dignity.
The bad news is that the Saturday of this tournament is one of my favorite hate-tweeting days. And with this not being an election year, I have no idea what I'm going to get to be all riled-up up about. I'm sure my fellow citizens of Earth will help me come up with something. They always do.
TWEET OF THE WEEK
Not a week goes by when I don't put on one of my seersucker suits, see a mouse run across the floor and exclaim . . . 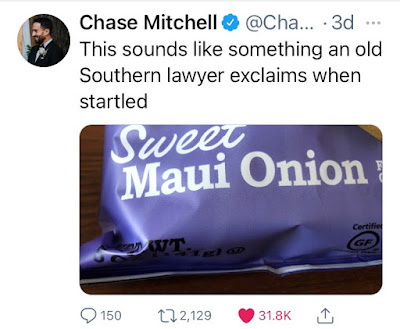 BE A GOLDFISH GOLF ANALYSIS
I'm going to heed the advice of Ted Lasso and pretend that I have the ten second memory of a goldfish instead of the actual fifteen second memory of an attention deficient middle aged guy. That should help erase any recollection of last week's ill-fated Daniel "Dead to Me" Berger pick. Though if I hadn't picked him, it would have been Justin Thomas or Webb Simpson, both of whom went backwards on Sunday so there is always a bright side (sometimes).
Dustin Johnson was a late scratch which means that we have zero players ranked in the top ten and only three of the top forty (Patrick Cantlay, Paul Casey and "Dead to Me" Berger). It is still, however, an intriguing field. Is Jordan Spieth's resurgence for real? Will Phil Mickelson discover the magic here like he so often does? Will we get teflon Jason Day or bag of potato chips Jason Day?
The last question is critical as I am going to take my annual pilgrimage into the risky abyss that is picking Mr. Day. His track record at this tournament is simply too impeccable to ignore. I'd say the same of Phil but he's turning erratic into a brand these days and I'm not buying. Oh and you should always consider Cantlay in California. It's like buying oranges or some shit like that.
The rest of this week's picks are an assortment of random guys who've played well on the coast before (Maverick McNealy, Nick Taylor and Brian Gay), young hopefuls (Will Zalatoris, Max Homa, Matthew NeSmith and Harry Higgs) and FGR favorite Joel Dahmen who once during the pandemic tweeted that he was looking for a game on Saturday and followed through on accepting the invitation. Above all else, we do love ourselves a true everyman.
One and Done Pick: Jason Day
Other Guy I'd Pick: Patrick Cantlay
Sleeper Pick: Brian Gay
DraftKings Top Ten Values
I'll probably regret not picking Kevin Streelman but it was either him or Max Homa and, with all due respect to Streelman, no one is picking him over Max for anything other than chaperoning a 7th grade field trip. And even then the kids will be pissed that you didn't pick Homa.
THE HAL HOLBROOK MEMORIAL*
HISTORICAL PERFORMANCE CHART
Footnote
* We would be remiss if we did not pay homage to Lou Mannheim who sits in the upper echelon of the pantheon devoted to small part characters who made good movies great.
Email the Fantasy Golf Report at fgr@fantasygolfreport.com.
Posted by Ronny Elliott at 9:30 AM