Last week held such promise heading into Sunday. I had recommended to my dedicated readers and taken a personal vested interest in Patrick Cantlay, Jason Day, Max Homa and Maverick McNealy, all of whom were positioned to win. In supporting roles I even had Matthew NeSmith, Nick Taylor and Brian Gay doing their part. I was ready to unleash the perfect storm of success, a truly rare occurrence for the FGR.
Alas, it was not meant to be as the guy I picked the prior week bounced back to win this week. I'm probably lowballing this number but I think that's at least the 573rd time a player I picked has missed the cut only to win the following week after I have pronounced him dead to me. I will learn nothing from this.
TWEET OF THE WEEK
I freely acknowledge that Tom Brady is the GOAT among quarterbacks but the inimitable David Simon is correct in his assessment of the golden boy and where he fits into the grand scheme of athleticism. 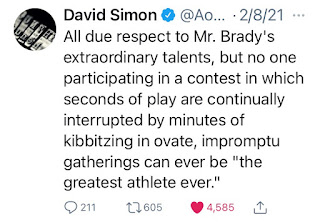 GOLF ANALYSIS FROM THE FEBRUARY ABYSS
We have every top ten ranked player in the field this week except for Webb Simpson and Tyrrell Hatton. Plus we have Brooks Koepka, Tony Finau, Adam Scott and Jordan Spieth who appears to be entering one of those enigmatic phases that great golfers go through on their way to becoming either (a) 2014 Rory McIlroy (good) or (b) 1994 Ian Baker-Finch* (bad . . . very bad). I see this week as a middling pause on that journey so I am staying away.
In addition to the loaded field, we've got a slew of guys who play great here all the time including Dustin Johnson, Justin Thomas, Adam Scott and Rory. Then you've got Bubba Watson who's won this thing three times along with guys like Marc Leishman and Kevin Na who have multiple top fives. It's a damn embarrassment of riches is what it is.
But we get paid to make the tough choices so we're taking Rory over D.J. and J.T. He hasn't won on American soil since the 2019 Tour Championship so he is beyond due. Xander Schauffele gets the nod over Koepka and Patrick Cantlay because he has been ridiculous in 2021 with a pair of runner-ups and a tie for 5th. For the sake of full disclosure, I have to say that I usually pick Xander in the wrong spot so I might change my pick to Cantlay at the last minute and not even tell myself.
You pretty much have to pick Bubba here. I was going to qualify that with an "unless" but who knows what impacts Bubba's performance so just pick him. Max Homa, Kevin Na and Carlos Ortiz are solid mid-range picks but Jason Kokrak is also worth a look. Sam Burns is Sam Burns.
Finally, I am convinced that both Talor Gooch and Doug Ghim are on the verge of breaking through. I'd tell you why but I'm up against the clock for my acupuncture appointment and, if I go in there with this unfinished preview hanging over me, she's going to drive an icepick straight into my forehead. No one wants that. Well maybe a few people.
One and Done Pick: Xander Schauffele
Other Guy I'd Pick: Rory McIlroy
Sleeper Pick: Doug Ghim
DraftKings Top Ten Values
This week's Historical Performance Chart honors what has to be the most cringeworthy advertising campaign since Bloomingdale's ran one in 2015 with a picture of a stalker in a nice suit staring at a woman with the tag line "Spike Your Best Friend's Eggnog When They're not Looking." Mike Meyers and Dana Carvey don't quite achieve that level of creepiness in their painful shilling for Uber Eats, but it sure as hell ain't for a lack of trying.
It's hard to ignore Sung Kang's impressive record at the bottom of this chart but I have managed to do it. Remember, I just make suggestions and you make decisions (oh dear God he's quoting Peloton instructors now . . . well it was fun while it lasted).
THE WAYNE'S WORLD . . . PARTY TIME
SHAMELESSLY . . . SELLING-OUT
HISTORICAL PERFORMANCE CHART

* I know that Baker-Finch was never the player that Spieth was (and still could be) but he is the best I could come up with so put your fucking hand down.

Getting to Know the FGR - Part 1

Now that we have this involuntary break in the golf action, I thought it might be a good opportunity for us to take some time to get to kno...