I had a long weekend and golf has provided me with a short week so we all know what that means . . . a very tight budget of thoughts and recommendations. After last week's Sam Burns debacle, that's definitely a good thing.
TWEET OF THE WEEK
I kind of want to question who drinks AT the liquor store but who am I to judge? Especially when presented with such clever word play as this. 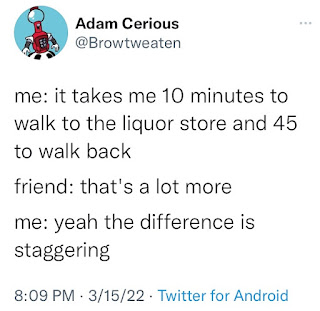 SUCCINCT GOLF ANALYSIS
The last five winners of this event were Billy Horschel, Kevin Kisner, Bubba Watson, Dustin Johnson and Jason Day. Players with multiple top fives during that same stretch include Johnson, Kisner, Jon Rahm, Sergio Garcia, Louis Oosthuizen and Alex Noren. Based on this cursory investigation, it would seem that the golf course evens-out some of the match-play advantage that good putters normally have over good ball strikers.
We also know that non-Americans are better at match play than Americans. It's a widely accepted fact just like the one about Americans not being able to play a bump and run shot and the other one about people from Virginia having no concept how to drive.
So with all of that and the unpredictability of this event in mind, we're playing it somewhat safe by picking Paul Casey who seems to fit all of the necessary stereotypes. The rest of the top ten is a bit of an international potpourri with an emphasis on past success. And we especially love Erik Van Rooyen as a longshot to make the final four because who wants to play a tempestuous South African James Bond villain? Well I would but I'm thinking that I don't represent the norm.
One and Done Pick: Paul Casey
Other Guy I'd Pick: Dustin Johnson
Sleeper Pick: Erik Van Rooyen
DraftKings Top Ten Values
It's time to retire the "memorial" theme for the Historical Performance Chart. While we come-up with some new ideas, we'll pay tribute to the legend of "Boaty McBoatface" and if you are not familiar with it, I would encourage you to waste three minutes of your time by clicking on the link and changing that.
HISTORICAL PERFORMANCE CHART
MCHISTORICAL PERFORMANCE CHART FACE
I believe it's worth noting that guys who've played here three or more times without making it to the final sixteen include Daniel Berger, Xander Schauffele, Matthew Fitzpatrick and Webb Simpson. So it has been noted.
Email the Fantasy Golf Report at fgr@fantasygolfreport.com.
Posted by Ronny Elliott at 2:47 PM