There was a point last Thursday as Rory McIlroy was strutting and peacocking his way around Bay Hill on the way to an opening round 65 when all seemed right with the world. I had used my one precious pick of the year on my favorite player and it looked like I was to be rewarded with a weekend of Rory bombs as he cruised to victory.
Alas it was not meant to be as Rory started to unravel with a back nine 38 on Friday that turned into a full-blown meltdown over the weekend highlighted by a Saturday double bogey after he had to back away from his tee shot to allow an ambulance to pass in front of the tee box. It was presumably carrying the remnants of my DraftKings rosters. Anyway, look for him to bounce back with a win at Sawgrass. Gambling is fun.
TWEET OF THE WEEK
This tweet was right before Rory and Adam Scott went full Thelma and fucking Louise by driving the mutual admiration mobile right over the edge of the cliff, shooting a combined +16 on Friday, Saturday and Sunday. For those of us who picked Rory, it was like watching your house burn down while the fire department from Roxanne tried to hook-up their hose. 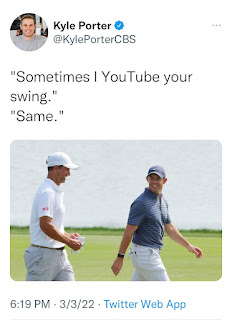 GOLF ANALYSIS FOR THE TERMINALLY OPTIMISTIC
Let's get this out of the way right from the start. There are no good picks on this suspect golf course.* Only two players have had more than two top tens here in the last six years. Care to name them? OK yes Jason Day is one . . . but good luck on the other guy. I could even tell you that his name rhymes with Ryan Carmen and 75% of the people reading this still wouldn't have any idea who in the hell I'm talking about.
Let's take a look at the track records of this week's favorites. Rory is a popular pick this week because he won it in 2019 and had a nice run from 2013-15 but he also has two missed cuts and a T35 in his last four trips. Jon Rahm has been trending nicely in his four trips going T72, T63, T12 and T9, however, TPC Sawgrass is not ideal for the short of temper. Believe me. I've experienced it firsthand (yeah yeah we know . . . please STFU).
How about last year's winner Justin Thomas? He could repeat right? Well let's take a look at how our past five defending champions fared upon their return . . . Rory McIlroy (MC), Webb Simpson (T16), Si Woo Kim (T63), Jason Day (T60), Rickie Fowler (MC) and Martin Kaymer (T56). So that would seem unlikely. And I'm not picking Colin Morikawa or Viktor Hovland either because I'm convinced we're headed for a second tier leaderboard on Sunday.
Not that the second tier is a bad place with this loaded field as it includes the likes of Patrick Cantlay, Dustin Johnson, Scottie Scheffler and my preference Xander Schauffele. Would I use a one and done pick on him here? Hell no but he's been playing well lately and he's actually starting to make me wonder if a Players title might be his unexpected ceiling a la Matt Kuchar, Rickie Fowler and Craig Perks (just making sure you're paying attention).
TPC Sawgrass doesn't necessarily favor a type as everyone from Tim Clark to Tiger Woods** has had success there but it seems to tilt towards the "ball-strikers" so that's where I'm focusing my attention. Remember that Sergio Garcia is arguably the greatest player in the history of this tournament (a somewhat dubious distinction) and he can't putt for shit which makes this the perfect fit for Will Zalatoris. Just remember to avert your eyes when he's inside five feet and remember that he's probably going to be putting for birdie on the next hole.
With that philosophy in mind, I am also recommending Adam Scott, Shane Lowry, Matthew Fitzpatrick and the aforementioned Sergio. For my winner I'm taking a leap of faith with Tommy Fleetwood. Hear me out. He's played the event four times and has two top tens which means he at least falls into the category of guys who tolerate the course. The weather is going to include rain, wind and fluctuating temperatures which is ideal for this game. And most importantly, if you pick him and he flops . . . who cares?
One and Done Pick: Tommy Fleetwood
Other Guy I'd Pick: Daniel Berger
Sleeper Pick: Tom Hoge
DraftKings Top Ten Values
I think I did a triple take when I realized that Rickie Fowler wasn't in the field this week. The FGR takes the occasional soft shot at him but it comes from a place of love as I still hold-out hope that he can rekindle the magic and sneak a major onto his resume. That would make for a glorious Sunday and the ensuing victory parade of skateboarders and BMX riders would be a hoot.

THE RICKIE FOWLER'S GAME MEMORIAL
HISTORICAL PERFORMANCE CHART
As noted above, this chart is basically useless unless you find it instructive that Brandt Snedeker, Charl Schwartzel and Jimmy Walker have all finished in the top five since 2018. Also, worth noting that their other six finishes over that span are five missed cuts and a tie for 67th. Pffft.
Footnote
* My feelings about the golf course do not detract from the fact that I now believe this a very entertaining and almost high quality tournament. Six of the last eight winners are major champions and the drama created by holes 16-18 is undeniable (even if it is manufactured). In my ongoing effort to be less of an asshole, I felt that needed to be said.
** I stand by my position that, if Tiger Woods has played your tournament 19 times and only won it twice with three other top tens, your golf course sucks. Now get off of my lawn.
Email the Fantasy Golf Report at fgr@fantasygolfreport.com.
Posted by Ronny Elliott at 8:19 AM