I posted the first Fantasy Golf Report on June 21, 2011 and for the entirety of its 10+ year run it has been written from the perspective of a country club d-bag. Well that perspective is about to change (at least for now). Not the d-bag part but the country club part. And I know what you're thinking but alas, there is no great fiery crash/simply left the board no alternative story to tell. Probably came closer than I know a few times but my survival instinct for stopping one word short of getting thrown-out and/or punched in the face served me well. I also usually paid my dues on time.
There are, however, other stories and I look forward to telling them one day after some time has passed and the statutes of limitations have expired (especially for that one incident . . . and that other one). Until then, I'm sure I'll keep doing other stupid non-golf related shit worth writing about because it's apparently in my DNA. Just last month I went on a lengthy drunken rant about how I was by far the best basketball player in a room full of superior athletes and almost ended-up stuffed in a very nice cedar golf locker. I assure you that will not change.
TWEET OF THE WEEK
I've had more different therapists than putters over the past 20 years. Most recently one asked me what kind of boundaries I had as a kid and all I could think of was "well, I had water on one side of my house and some low hedges . . ." Most weeks it goes like this. 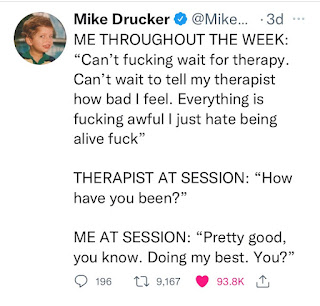 GOLF ANALYSIS WITH INCREASING CHANCE OF CLOUDINESS
As a matter of laying some groundwork, we need to acknowledge that the field this week is hot garbage with only one top ten player and three from the top twenty. In the olden days of the FGR, I would convince myself that these circumstances called for picking some above average ham-handed dope because the field was not worthy of choosing a star. But then I was like, "hey dumbass, if there's a John Wick in the field, pick him and watch him rack-up the body count."
So that's a whole lot of words to say I'm going with Patrick Cantlay. He is by far the best player in the field, finished 3rd here last year and started 2022 with a pair of top tens. I won't fault you if you want to apply the same theory and pick Daniel Berger, Jordan Spieth or Will Zalatoris but this feels like a go big or go home situation.
You have to find a place for Jason Day in your plan considering he has seven top tens in the last nine years with five of those being top fives. However, before you get too mesmerized by his tie for 3rd last week, remember that it was his first top five since the 2020 PGA Championship and he's missed the cut in six of his last thirteen tournaments. Also, he's Jason Day which is Australian for "fragile bird."
I'm probably getting out over my skis on Cameron Tringale due in no small part to my counter compensating for the "Tringale Rule" established last year which he has now totally screwed-up by climbing to 49th in the world. Yes I absolutely take some credit for his recent success. And in a related story, I need to find a new journeyman to replace him. It could be Maverick McNealy which would have the added benefit of endless Top Gun references (you mean they aren't currently endless?).
The rest of the picks are straight-up based on past performance as there are clearly those who thrive in this format and those who don't. The one dilemma was the sleeper pick. I'm feeling a comeback narrative this weekend and I was torn between Kevin Chappell and Jimmy Walker. I ultimately went with Chappell because I'm feeling a little more upside there but it's hard to ignore the run Walker had here from 2011-14 when he went T9, T9, T3 and a win. I distinctly remember using that data when I picked him in 2017 and he finished T55.
One and Done Pick: Patrick Cantlay
Other Guy I'd Pick: Cameron Tringale
Sleeper Pick: Kevin Chappell
DraftKings Top Ten Values
Unfortunately the memorial tributes continue as we lost Howard Hesseman this week. For those not familiar with his work, Hesseman bounced around in the early to mid 70's before landing recurring roles in three quality comedies - Mary Hartman, Mary Hartman (that's one show - not two different shows with the same name), The Bob Newhart Show and Soap.
Someone then looked at that body of work and thought "this guy was meant to play a burned-out and somewhat caustic radio D.J. in Cincinnati." And Dr. Johnny Fever was born. You're not going to find him on any list of the greatest sitcom characters of all-time* but make no mistake, he was iconic and the backbone of a very underrated and ahead of its time show.
THE DOCTOR JOHNNY FEVER MEMORIAL
HISTORICAL PERFORMANCE CHART
I threw some shade at Maverick McNealy but I held something back. I see some real genius in his golfing but I couldn't say that up there. Chez Reavie and Russell Knox are also worth a look as guys who grind it around the peninsula pretty consistently which makes sense considering they both sound extras from Magic Mike XXL.
Footnote,
* Do yourself a favor and don't go looking at lists of the greatest sitcom characters of all-time. The only one I could find that even considered anyone from the golden age before Friends and That 70's Show had Norm Peterson ranked 103rd . . . four spots behind Aunt Bee. The same list had Hawkeye Pierce ranked 77th . . . eleven spots behind Urkel. Fucking Urkel! When the downfall of our civilization is studied by aliens, they're going to look at that list, watch five minutes of Urkel and close the case.
Email the Fantasy Golf Report at fgr@fantasygolfreport.com.
Posted by Ronny Elliott at 4:45 PM

Love your work my man! Cantlay def a layup. All my models are telling me to play Rose, Streelmen,Reavie and Lashley. Good luck to us! Cheers brotha and keep up the awesome work