One aspect of the day job I maintain to supplement the income from this endeavor is being part of the decision to fire people who fuck around and find out.* It's both ironic and appropriate when you consider my lifelong quest for walking straight into the types of situations that lead to fireable offenses. I'm like the Jason and the Argonauts of doing stupid shit.
Fortunately, I discovered the construction business (or it discovered me). Either way, it probably maintains about the lowest personal conduct expectations this side of the NFL . . . or the United States Congress.
Yet some still find a way to do things that make you go "really?" and that's where I come in. Invariably, many of these situations begin with some innocent "horseplay" (actual word used) which leads me to wonder how many occupations still engage in regular horseplay. Pretty much just firemen, longshoremen and major league baseball players right?
I've worked in a couple law firms and never really encountered any horseplay and I'd assume the same thing about accounting firms but, then again, I wouldn't put it past those nerds as I've seen them do some pretty fucked-up shit. I don't think there's a lot of horseplay while they're taking inventory at The Gap, making the donuts at Krispy Kreme or plotting the end of civilization at Facebook but I could be wrong.
Maybe we need to bring horseplay back. A little friendly jostling, the occasional game of keep away with a fanny pack and a few well-placed whoopie cushions might be just what this country needs to loosen-up. Just don't cross the imaginary line or I'll have to fire your ass.
TWEET OF THE WEEK
Ruth Langmore straight-up asked the question that has plagued those of us who periodically make this reference but fuck-up the timing because we have to pause and think, "wait, the numbers are backwards right?" 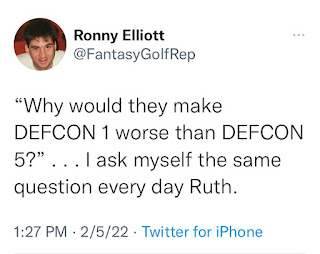 GOLF ANALYSIS WITH A SHOT OF PICKLE JUICE
We showed some signs of life for the second week in a row as my top ten picks included Tom Hoge (1st), Patrick Cantlay (T4), Andrew Putnam (T6), Nick Taylor (T14) and Jason Day (T24). Of course my other five missed the cut but you can't expect me to do everything around here.
We have an absolutely loaded field this week with six of the top ten and fifteen of the top twenty. We also have the last seven winners in Brooks Koepka (2), Hideki Matsuyama (2), Webb Simpson, Gary Woodland and Rickie Fowler. Add in the boozy raucousness and there is nothing not to love about the golf this week.
From 2014-2017, Hideki went T4, T2, 1st, 1st before leveling-off the last four years including a W/D in 2018 which was, of course, the year I picked him (totally over it). This year he comes in on a roll after winning two of his last four events so this may be a bit of a gamble because what are the odds of him winning three out of five? A real gambling website would probably know that.
Xander Schauffele and Bubba Watson have had similar levels of success here. Both are due for a win so I may shuffle this pick to one of them or Tony Finau. Or Webb Simpson. (Come on Ronny think goddammit!) This would be a good time to note that the guy in the hotel room next to mine left his TV on the entire night and this morning my FitBit described my sleep status from 3:30 a.m. to 5:15 a.m. as "stifled rage."
The rest of the picks are solid. Trust me. Especially Nate Lashley who will definitely finish top twenty. I have an irrational confidence in guys named "Nate." I mean at some point they endured being "Nathan" and made it this far so the "Ronalds" of the world tend to respect them.
One and Done Pick: Hideki Matsuyama
Other Guy I'd Pick: Xander Schauffele
Sleeper Pick: Nate Lashley
DraftKings Top Ten Values
Fortunately no comedic geniuses died (as far as we know) so we'll pay tribute to the most prominent death of the week.
THE 2022 WINTER OLYMPICS MEMORIAL
HISTORICAL PERFORMANCE CHART
Seriously, it was unwatchable before I saw the ski jumping from Three Mile Island.** Anyway, there are certainly a lot of top ten finishes sprinkled throughout that chart to draw your attention. Does Rickie Fowler catch lightning in a bottle? Gary Woodland? Chez Reavie??? . . . Nah.
Footnote
* I think "fuck around and find out" is my favorite expression of this young decade because it can be used in so many situations from deciding whether a bar fight is a good idea to calculating your chances of getting caught for committing a crime like say, trying to stage a ham-handed coup. Yes you've done your ill-informed calculations but will you really know until you grab him on the shoulder whether the guy who just cut in front of you while you're trying to order a Jim Beam and Coke at the Cheesecake Factory is an amateur MMA fighter? No. So go ahead. Fuck around and find out. Maybe everyone else will get a fun story to tell.
** The Three Mile Island Incident is worth five minutes on Wikipedia for those who are too young to remember it or didn't live within radioactive cloud range of it where it happened.
Email the Fantasy Golf Report at fgr@fantasygolfreport.com.
Posted by Ronny Elliott at 8:04 AM