This week is a perfect example of the "Tringale Rule" which is of course named after professional golfer Cameron Tringale who has been on the PGA Tour since 2010 with no wins. He has played in eleven majors and missed the cut four times, been DQ'd twice (an interesting accomplishment) and never finished better than T38. He has a respectable but unspectacular $13,127,013 in career earnings which puts him 151st all-time right between Jhonattan Vegas and Alex Cejka . . . the golfing equivalent of a two-bedroom townhouse in a neighborhood with good schools but no steakhouse (Outback doesn't count).
So what is the "Tringale Rule" you may ask if you're actually still reading? Well the "Tringale Rule" (which I invented five minutes ago) is the perfect way to measure the strength of a PGA tournament field. To apply it, you will need two things: (a) Cameron Tringale in the field, and (b) DraftKings salaries. Then you just look-up Tringale's salary for the week and use the following chart to determine the strength of the field.

This week Tringale's salary is $9,300 so the field by definition sucks and that was before Dustin Johnson bailed to go spelunking with Jeff Probst and Bobby Flay. But I'm going to write about it anyway because I find it soothing. Speaking of which . . .
TWEET OF THE WEEK
I read tweets like this and feel like I should take comfort in the fact that I'm not alone but no one who feels like this really takes comfort in anything. 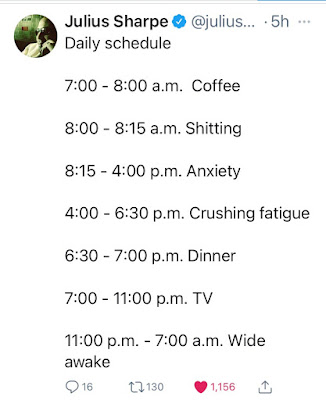 GOLF ANALYSIS THAT HANDLES LIKE A MIATA
Scottie Scheffler seems like the obvious pick coming-off his second place finish last week and his T20 here last year. Not to mention, he was born in Texas, went to the University of Texas and just oozes Texas like Bum Phillips ranting about secession while riding a mechanical bull. The only thing the golf world loves to love more than Texas is bragging about donating 1/10th the cost of a corporate tent to local charities. Anyway, I'm picking Scheffler.
I have to admit that there was a temptation to pick Jordan Spieth this week but, if you actually think he's back, then grow a pair and save him for the Masters or the British Open. At least that's what I literally told myself.
Corey Connors, Ryan Palmer, Matt Kuchar and Zach Johnson all bring that savory combination of current form and past success. You might be surprised to know that Zach Johnson has made 14 straight cuts since the PGA Championship and just finished T8 at the Honda Classic. I know I was.
The rest of the picks are kind of sleeper/chalky for lack of a better word (that's two words). I am, however, very intrigued by the Kevin Chappell comeback story. He won this event and finished T7 at the Masters in 2017 and climbed to 23rd in the world. Then in 2018 he went out with an injury before coming back in 2019 and shooting a 59 at the Greenbrier on his way to a tie for 47th with your typical run of 71-59-73-72. He's since been on a bit of a rollercoaster ride of down weeks combined with glimpses of his old form. In other words, exactly my kind of guy.
One and Done Pick: Scottie Scheffler
Other Guy I'd Pick: Ryan Palmer
Sleeper Pick: Kevin Chappell
DraftKings Top Ten Values

Not a lot to see in this week's Historical Performance Chart unless you have a weird fascination with the letters "DNP."
THE MATT GAETZ COMPANION PASS
HISTORICAL PERFORMANCE CHART
Email the Fantasy Golf Report at fgr@fantasygolfreport.com.
Posted by Ronny Elliott at 11:56 AM

Knew I should of picked Tringale after your excellent post!