Well we were due for a bit of a deflation week and The Honda Classic delivered. You'd think a tournament sponsored by a car that you can drive for 75,000 miles without changing the oil would deliver more of a reliably entertaining product but alas, you'd be wrong. All credit to Matt Jones for mastering a golf course that was more dangerous than an actual grizzly bear according to the ominous tones of Dan Hicks and Paul Azinger. I'm just thankful no one was hurt.

Always nice to discover a kindred spirit even if it does nothing to help your condition. 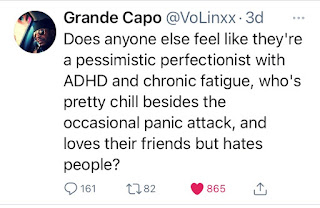 Matchplay is always a bit of a crapshoot but since moving to Austin Country Club there has been some sense of order to it with a handful of players making it past the group stage on multiple occasions. That includes a lot of good mid-value options this week including Paul Casey, Tyrrell Hatton, Sergio Garcia and Louis Oosthuizen, all of whom I would recommend as one and done options because I'm too chicken shit to role the dice on an upper echelon player in this format. In fact I'm going with Casey as my pick even though I know he can't win but there's no downside if he flops because hey, all you did was waste Paul Casey.
You can pretty much close your eyes and throw a dart at any of the top eight guys. I'm throwing mine at Jon Rahm and Patrick Reed. Not saying I'd like to throw an actual dart at anyone of course but . . .
Plenty of solid options at the bottom of the price range and I'd have Matt Kuchar as a lock for sleeper if he didn't have to escape the group of death with Justin Thomas, Kevin Kisner and Oosthuizen. Who knows? Maybe the residual karma from his win in Mexico will carry him through.
One and Done Pick: Paul Casey
Other Guy I'd Pick: Louis Oosthuizen
Sleeper Pick: Kevin Na
DraftKings Top Ten Values
Named in honor of the Big 10 successfully advancing just one out of nine teams to the Sweet Sixteen and proving that it's more overrated than Coldplay. Note that any player with a pretty color or two next to his name below has advanced out of the group stage which is a good thing.
THE BIG 10 CONFERENCE ON A MILK CARTON
HISTORICAL PERFORMANCE CHART

Posted by Ronny Elliott at 4:16 PM