One of the few (if not only) benefits of writing a golf blog for a limited local audience is that you can occasionally use it to share information with a bunch of people at one time that you don't feel like sharing over and over again in person. I hear social media serves the same purpose but not when your audience is a bunch of middle aged dudes who 97% of their shopping at pro shops and liquor stores. (The other 3% is when they go to the mall with their wives once a year just so they can say "I'm never making THAT mistake again").
In this case, the information I need to share is the fact that I broke my left arm playing lacrosse last week. There, now everyone can respond "what a fucking idiot!" and I don't have to hear it.
In my defense, it was wrought by a total unsolicited cheapshot (at least I think it was unsolicited) as opposed to the kind of on field negligence that caused my broken ribs last January and my broken hand the fall before that. And no, I do not see any of this as a sign that I should change my behavior. I will not be intimidated in these negotiations and let the terrorists win.
TWEET OF THE WEEK
We don't get Tiger this week so here's the next best thing. A Tiger tweet that's not about Tiger (and not actually a tweet) but it is about a tiger and it came from a tweet by @shay3322 who's profile is . . .

She had me at coffee and whiskey. "Shenanigans" just made me want to marry her. 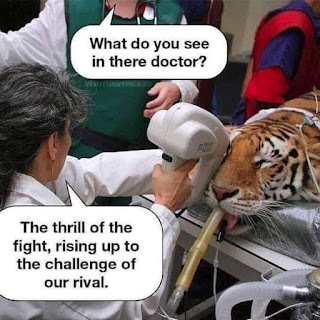 GOLF ANALYSIS THAT USES A MACHETE TO CUT THROUGH RED TAPE

Before we get to this year's analysis, I would be remiss if I didn't take this opportunity to revisit last year's preview in which I wrote:
So with that in mind, the FGR predicts that one of last year's three runner-ups is going to break through with DJ being the most likely after his strong showing in Houston last week. You could argue that his "A" game is better than anyone else's "A" game and there is no way that his final resume is only going to include one major win. I wouldn't be surprised if he won by 4+ shots this year.
Let's just take a moment to sit back and appreciate the greatness of that.
Just a bit longer.
OK feel free to keep gazing in awe but we need to move on.
I need to share a few caveats before we get started. First, I'm never going to pick Bryson to win this tournament as a matter of principle. Second, I still don't think Rory McIlroy is ever going to wear the green jacket. (I used to feel the same way about Justin Thomas but . . . ahem . . . more on that in a minute). And finally, I believe that Phil Mickelson is going to make one more run. But not this year.
Let's just cut to the chase and kill the drama that I so craftily built-up in the last paragraph. The pick this week is Justin Thomas. Sure I know last year I wrote that he has less of a chance to win than Rory but what can I say? I changed my mind because (a) I believe he is the best player in the world, and (b) the other best player in the world is probably coming into this thinking "didn't I just win this thing a few months ago?"
Also, Thomas has played the Masters five times and improved his finish every year going T39, T22, T17, T12 and 4th. That's what we in the prognosticating business like to call incremental improvement or a learning curve or trending upward or something. Whatever it is, I am swayed by it.

As always, there's a lot of value between $9,000 and $10,000 with every player in that range bringing a certain amount of intrigue (arguably one of the five most worthless throw away sentences I've ever written). Unfortunately, I can't pick them all so I'm narrowing it down to Jordan Spieth, Webb Simpson and (barf) Patrick Reed. Three somewhat chalky picks but hey, it's a pretty chalky tournament.

We need a couple of young dudes and I'm going with Victor Hovland and Scottie Scheffler by putting a lot of stock in the results from the WGC-Workday Championship where Hovland finished T2 with a quadruple bogey and Scheffler finished 5th. And yes, I know I'm ignoring Colin Morikawa who actually won that tournament. Shut up.

Now we get to the REAL value guys and, in this tournament, they're lurking everywhere. Bullet points activate!!!

You could  make equally as, if not more compelling cases for plenty of other guys like Jason Day , Mark Leishman, Louis Oosthuizen, Francisco Molinari and Ian Poulter. As always, let your conscience be your guide (says the guy picking Patrick Reed). And if that doesn't work, just do what I do. Guess.

One and Done Pick: Justin Thomas
Other Guy I'd Pick: Jordan Spieth
Sleeper Pick: Matt Kuchar
DraftKings Top Ten Values
There is simply no greater historical performance chart in all of golf. I mean look at all the pretty colors on that damn thing. And this week I'm naming it in honor of the FGR's official sports performance drink of 2021. White Claw made an offer I couldn't refuse so Tito's is out. Not to mention, the carbonation is very refreshing.
THE WHITE CLAW AND GATORADE
HISTORICAL PERFORMANCE CHART
Footnote
* The theory basically states that the odds against there being a bomb on a plane are a million to one, and the odds against there being two bombs on a plane are two million to one. So next time you fly, take a bomb and cut the odds in half. I have extrapolated that to determine that Kuchar will absolutely make the cut this year.
Email the Fantasy Golf Report at fgr@fantasygolfreport.com.
Posted by Ronny Elliott at 10:51 AM