It's going to be a thin preview this week as it always is while recovering from the Masters hangover. Sunday was barely dramatic and the outcome was pretty much decided by the 72nd hole but I miss it already and I find myself sitting here wondering how I'm going to fill this gaping void in my heart for the next 350+ days. (Jesus get ahold of yourself man!) Good thing my kids have started playing sports again. At least that's something I care about almost half as much.
Not to mention I have a whole crew of comedians in my yard cutting down trees. Or at least one guy cutting down a tree and five other guys smoking cigarettes, cracking jokes and yelling instructions at him. I honestly can't tell which end of the chain of command the guy with the chainsaw is on but I'm guessing from the unending rash of shit he’s taking, it’s the bottom. This is really not the least bit distracting.
TWEET OF THE WEEK
By Monday evening I still found myself muttering “I can't believe that Schauffele hit that ball in the water.” I wasn’t rooting against Hideki by any means as he absolutely deserved to win. I was, however, rooting for a compelling finish. Especially after DJ dog walked the field to the finish line last fall. And can you guess the last time the winner of a major championship stepped up to the 72nd tee with a lead of one shot or less? It was Francesco Freakin' Molinari at the 2018 British Open and he ended-up making birdie and winning by two shots. We haven't had any real final hole drama since the 2017 Masters when Sergio beat Justin Rose in a playoff. I want my drama dammit!!! 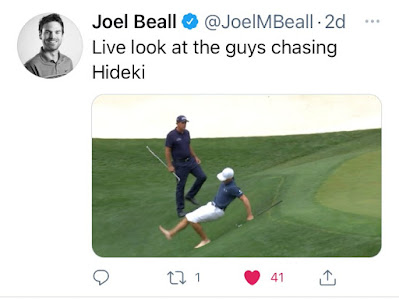 The good thing about the RBC Heritage is that the same guys play every year and basically finish in roughly the same spots so it's fairly easy to preview. Just decide whether you want to go with Patrick Cantlay or Webb Simpson, fill-in with Brian Harmon and Abraham Ancer, add some Matt Kuchar and then find a few dark horses and you're all set. With all of that being said I'm going with Tyrrell Hatton because I'm in a no fucks to give mood and he seems like the perfect pick for that. And that's the preview.

One and Done Pick: Tyrrell Hatton
Other Guy I'd Pick: Webb Simpson
Sleeper Pick: Rory Sabbatini
DraftKings Top Ten Values
Shane Lowry and Kevin Na also stand-out below and would be the perfect guys on which to base and awful Golf Channel show inspired by The Odd Couple.
THE BERNIE MADOFF MEMORIAL
I DIDN'T KNOW HE WAS STILL ALIVE
HISTORICAL PERFORMANCE CHART

Posted by Ronny Elliott at 1:33 PM