Depending on when I actually publish this, I either will be spending or will have spent election night running around a lacrosse field on two partially torn hamstrings getting rocked on several occasions by "dudes" who are 10 years younger than me, 60 pounds heavier and have tattoos of guns shaped like pick-up trucks on their forearms. (I actually pulled a calf muscle just trying to warm-up so didn't even get to enjoy the experience of being trampled by a buffalo). Apparently around 1985 someone burned the memo that dictated a certain number of spots on every team were reserved for the mouthy yet slight of build sons of professionals and let all of the plumbers' kids start beating the crap out of us.

Anyway, as we navigate what will undoubtedly be a tumultuous immediate future, let's please try to remember that the one thing we have in common is that we are all Americans (except for those readers who are not Americans . . . help us). That means that when this is over, we shouldn't waste time kidding ourselves that we are going to come together as one nation but should instead continue ripping each other to shreds on social media in support of politicians who wouldn't piss on us if we were on fire. Well except maybe Mitt Romney but he pisses white zinfandel so it wouldn't help anyway.

If we're going to do this, let's do it right. Like the news crew rumble in Anchorman or College Park, Maryland after a win over Duke. If we're not flipping-over cars and burning mattresses by Thanksgiving, well then goddammit, I don't even know who we are anymore.

Someone at the Oregon Bureau of Tourism deserves a raise. 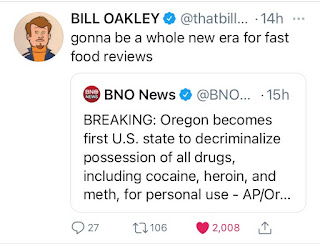 We've got a pretty solid field for Masters tune-up week including Dustin Johnson, Tyrrell Hatton and a  bunch of the best relatively new players out there from Scottie Scheffler to Viktor Hovland to Doc Redman. I'm pretty confident that the winner is going to come from that crew because it's time to break this recent run of Martin Laird, Sergio Garcia, Brian Gay and Stewart Cink. I mean what in the hell is this people? 2010? Because I don't hear no Ke$ha playin' and I honestly wouldn't know if I did.

This feels like a toss-up between those three guys I mentioned earlier. Like two sentences ago. Scheffler and Redman are looking for their first wins while Hovland needs to add a second before that Puerto Rico Open curse gets into his bloodstream. I'm going with Scheffler because he played at the University of Texas and this tournament is in Texas. It's a really stupid reason but sometimes those are the best ones. Don't ask me for examples.

One rung down on the best young player tier you'll find Talor Gooch, Denny McCarthy and the forever consternated looking Beau Hossler, all of whom have played well recently. I'm sprinkling in a little experience with Brian Harman and Brandt Snedeker to hedge against the possibility that we're just riding a crusty old guy wave. Of course Hatton is probably going to win but he's looking like my best bet at Augusta so I'm saving him at what will surely be my peril.

One and Done Pick: Scottie Scheffler

Other Guy I'd Pick: Viktor Hovland

Posted by Ronny Elliott at 4:45 PM