You're goddamn right I'm previewing this dogshit tournament and I am frankly downright excited about it. We had a minor bounce back last week by recommending Justin Thomas over FGR killer Xander Schauffele and picking Kevin Kisner (T14) as our sleeper. Sure the rest of the picks sucked but at least we didn't have a second consecutive week of underperforming the NFC East.

On the personal front, yet another hurricane is bearing down on the city where I abandoned my eldest child two months ago so, if he's reading this, good luck kid. Meanwhile everyone's favorite highly transmissible virus appears to be making a 1987 Aerosmith comeback and, as a result, I have been thrust back into the role of company buzzkill. (Like I ever stopped playing that role . . . "Oh great, another memo from that 'lawyer' guy").

Nothing quite like that Dean Wormer feeling of walking into a room and having everyone scramble to put their masks on . . . "Well, well, well. Looks like somebody forgot there's a rule about wearing masks in the office while we're in the middle of a pandemic." And if you don't think we're living in super fucked-up times, consider that there are actually real live adult people currently relying on my sound judgment and guidance. You know that when my cockroach-like survival skills become useful to others, things have definitely gone more sideways than the last fifteen minutes of a Quentin Tarantino movie.

I may have posted this one before but I don't know and I don't care. It's been relevant on 75% of my Saturday mornings since March. 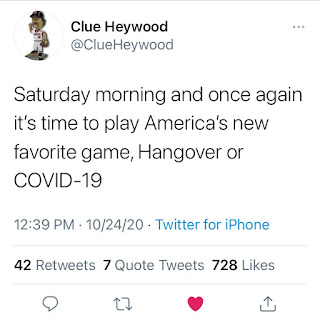 This will be the second running of The Bermuda Championship and last year Brendon Todd won which might make you think "huh" until you realize that he missed four out of five cuts leading up to it and only made about $250K the year before. Make no mistake. This is a total crapshoot. So here are some random facts on which I'm basing my picks:

So there you have it. Science. Distrust it at your peril.
One and Done Pick: Denny McCarthy

Other Guy I'd Pick: Will Zalatoris