I'm not going to bore you with any personal stories because I kind of recognize that Masters week is bigger than the FGR. Not to mention, I know we're all exhausted and no one wants to hear about how I didn't get drunk and do anything stupid over the weekend because where's the fun in that? (Shit I didn't even do a Fireball shot or pretend to try to smoke a cigarette). So we're going to keep it really golfy in honor of the occasion.

Before we get to this week's preview, however, I want to take a moment to reflect back on last year's Masters because I don't really feel like Tiger Woods got enough credit for what he accomplished if you can believe that. Maybe it's because they moved the final round start time up to beat the weather or because it took two back nine double bogeys by Francesco Molinari to open the door. But I don't remember seeing a deep dive into the absurdly ridiculous final leaderboard that Tiger topped to win the green jacket. (Note that there could have been a dozen articles written on this very topic but I don't read anything anyone else writes about golf).

Check out this partial list of players (including contemporaneous world rankings) who finished in the top twelve and within five shots of the winning score:

That ain't the Mayakoba Classic field my friends. He out-kicked 7 of the top 10 players in the world and 13 of the top 25 and he did it coming from behind with birdies on 13, 15 and 16 as that posse was swarming all around him. I don't even like Tiger that much anymore but that was some next level impressive shit, the likes of which we may never see again.

Considering this is Masters week which should be a unifying experience, I decided to avoid tweets that were political in nature and especially those mocking the Four Seasons Total Landscaping debacle but then I changed my mind because I can't stop laughing at this . . . 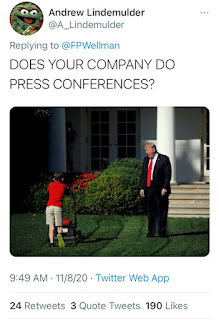 There are a few premises on which my Masters' picks are based that I need to disclose so that you can decide whether you want to ride with me this week. It's like getting ready to go on a four day road trip with seven guys in two cars and as you're making your vehicle choice based on the quality of conversation, one of the two drivers announces that "I plan to eat a shitload of queso dip and listen to a fuck ton of Coldplay boys!" You'll have to decide if I'm that driver in this misguided analogy or the other one based on the following:

So with that in mind, the FGR predicts that one of last year's three runner-ups is going to break through with DJ being the most likely after his strong showing in Houston last week. You could argue that his "A" game is better than anyone else's "A" game and there is no way that his final resume is only going to include only one major win. I wouldn't be surprised if he won by 4+ shots this year.

You can make almost as strong a case for Schauffele who now has seven major top tens in thirteen tries after his 5th place finish at the U.S. Open. It's not if but when for him.

And that brings us to Koepka who has dropped from #1 in the world to 12th since the start of 2020 but just shot 65-65 on the weekend in Houston. The schedule has been so out of whack that it's easy to forget that he's won four of the last twelve majors and his worst finish in 2019 was a T4 at the British Open. You know there is nothing he'd rather do than snuff out Bryson's limelight and troll him while holding his four major trophies while wearing the green jacket. Talk about a unifying message.

The rest of the picks are pretty chalky but this is the one tournament where that's ok (as evidenced by last year's final leaderboard). Augusta was practically built for Bubba and Jason Day has been in position to win this thing three times including last year. Rickie Fowler is a bit of a flyer because he's been struggling but I'm sensing a feel good run for him this week. And Kuchar, Matthew Fitzpatrick, Ian Poulter and Francesco Molinari have played here a combined sixteen times in the last five years with zero missed cuts between them so that should be four live cards going into the weekend.

I don't know about you, but to quote my favorite house music D.J.**, I'm downright G. Gordon Giddy.

One and Done Pick: Dustin Johnson

Other Guy I'd Pick: Xander Schauffele

This might be the most valuable historical performance chart you'll read all year, if not ever. Notice how it reveals that some guys play well at Augusta almost without fail (Kuchar, Molinari and even Adam Hadwin) while others just can't seem to figure it out (Tyrrell Hatton, Gary Woodland and Shane Lowry). Though don't be surprised if Hatton pulls a 2016 Danny Willet. He's playing about as well as anyone on the planet and, if we've every deserved a miked-up snarky Brit contending for a major on Sunday, 2020 is the year.

* I of course don't have an Aunt Martha.

** Yes I have a friend who is a D.J. and I don't know if what he plays is actually "house music" but hat's what I call pretty much everything that isn't The Who, Rush and The Allman Brothers.