This week has gone out of its way to derail me from what I believe is a perfect writing streak since golf returned to action in June. Monday was just a total fucking pandemic grind and then Tuesday said "hold my beer" as I spent a good chunk of the morning wandering around IKEA convincing myself with little effort that, if there was a hell on Earth for men, it would be an heavily merchandized store devoted to shit quality impossible to build furniture with unpronounceable names. And of course mind numbing modern pop music would be ringing through the fucking Fjallbo and shaking the Upplaga right off the goddamn Morbylanga.

Then I decided to brighten today by going in for my annual physical to make sure that my liver hasn't given-up hope and moved to Sarasota. After navigating and lying my way through the Rona screening (hey I've had half the symptoms every morning for the last 20 years), I took my seat in the waiting area. And that's when the inspiration fairy decided to pay a visit.

Within a matter of minutes I heard the distinctive sound of bitter old person anger at the check-in station and I immediately tuned-in to see if there was a Twitter star in the making. Apparently this elderly woman who appeared to be in her 90's had made a prior request for assistance upon arrival so a nurse was there to warmly greet her with a wheelchair which this cranky old bat immediately scoffed at and dismissed in disgust like it was a gay grandchild.

But Grandma Hannity was just getting started. After ruining everyone's day at the entrance, she begrudgingly allowed herself to be escorted by the nurse through the waiting area at which point she decided to fully vocalize her frustration at the COVID protocols by speculating aloud that, "THESE CHINESE REALLY MUST HATE US . . . COMMIE CHINESE . . . BOY DO THEY HATE US." Normally one must dine at a Panda Express to get that mad at the Chinese. Memaw is gonna be a real hoot on the Thanksgiving Zoom call this year.

There were a lot of strong candidates this week but this one allows me to remind everyone that I picked DJ to win the Masters on this very website going so far as to say "I wouldn't be surprised if he won by 4+ shots this year." What can I say? I'm an expert. Says it right there in my Twitter bio. 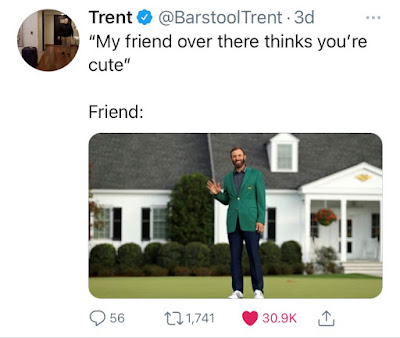 GOLF ANALYSIS FOR THE ATTENTION DEFICITED

Here's everything you need to know about this tournament. A lot of these sneaky British types (I'm looking at you Poulter) are going to hang around and play this week but fuck those crumpet eaters. This is a tournament for good ole boys (Kevin Kisner) and the well-healed southern elites (James Frederick Webb Simpson). So primarily stick with the guys who drive $75K pickup trucks and pray to dear lord baby Jesus and you'll do just fine.

One and Done Pick: Russell Henley

Other Guy I'd Pick: Webb Simpson

Posted by Ronny Elliott at 6:38 PM