I couldn't manipulate the PGATour.com bracket into something usable because, like most other things on that website, it sucked so I said "fuck it" (literally said it out loud) and made my own. (Scroll down for this week's DraftKings picks). Below is the product of my efforts. If this was a third grade art project, it would elicit an awkward forced smile from the teacher immediately followed by a call to my parents with questions like, "is there a history of learning issues" and "how does he treat animals?"

Unfortunately, if I'm right, we only get one powerhouse match-up after the group stage and that's Jon Rahm v. Rory McIlroy in the quarterfinals though D.J. v. Z.J. is an intriguing contrast and it will be fun to watch Rory and Bubba taking turns out-bombing each other. To be honest, outside of Spieth v. Reed and Oosti v. Day in the group stage, there really isn't much guaranteed appointment viewing. That's what happens when Rickie Fowler, Justin Rose and Brooks Koepka blow-off the tournament and Tiger doesn't make the guest list. Maybe it's time to reduce the field to 32 players and have two sponsor's exemptions (this year they would be Tiger and Bubba). Just sayin'. 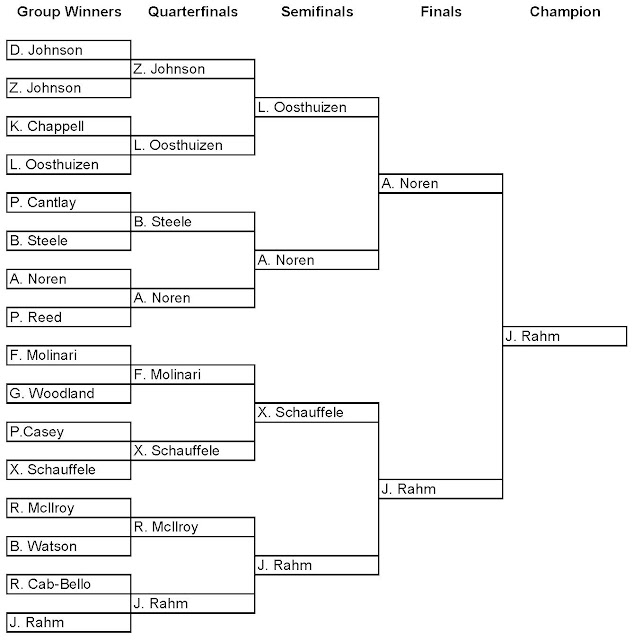 Email the Fantasy Golf Report at fgr@fantasygolfreport.com.
Posted by Ronny Elliott at 11:05 AM