(Just write what you're thinking)
This is what I wrote on the plane today. Now I'm very drunk. I haven't read it much less proofread it.
I'm currently on a plane to Florida fleeing the carnage of last week's picks in search of warmer weather, a reprieve from the daily drumbeat of Omicron and my golf game. The next couple of days were supposed to be a preamble to an ill-fated old man lacrosse tournament this weekend that I would be entering with an arthritic knee and two calf muscles wound tighter than a travel soccer coach on a seven game losing streak who just worked three straight double shifts behind the pharmacy counter at CVS. Yes. They're that tight.
Alas, the lacrosse tournament was cancelled due to COVID because by all means the biggest threat to a bunch of 50+ year old guys running around outside and bashing each other with metal poles is an airborne virus. Then again, the odds of me breaking a bone in the next five days just went from 2-1 to 5-2.* The smart money is on a clavicle at 11-1 as mine are made of glass and always seem to find themselves in harm's way.
Well when one door closes, the opportunity to visit one of this country's sweet golf enclaves apparently opens. I'm now staring down the barrel of 72 holes of concierge level good times. And you may find this hard to believe but I tend to thrive in that type of environment. By Thursday night I should be fully ensconced and carrying-on like a combination of Hank Moody and Roman Roy. I will report back next week.
TWEET OF THE WEEK
If not the Bible, at least the sequel to Aesop's Fables or some shit like that . . . 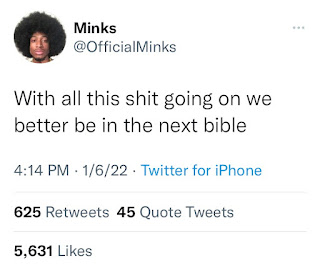 GOLF ANALYSIS FOR THE SLOW TO MATURE
As noted above, last week's recommendations were, ahem, not good. The Bryson DeChambeau pick was clearly misguided but, if you've done your homework on me, you should know by now that you should never to listen to me when the tone is spiteful. At least I directed you away from picking Xander Schauffele (sort of) so now you get the pleasure of watching him represent you in a major. You're welcome.
I hate picking the same guy as the purveyor of chalk over at PGATour.com because I fancy myself an iconoclast but I can't talk myself out of Corey Conners. Once you latch-on to a Canadian, it's hard to let go. Webb Simpson also makes a lot of sense but I want to wait and see on him. Not to mention, there are like five great spots to use him down the road. And Marc Leishman is logical but he inevitably fails me and I can't go into this tournament knowing that my ceiling is a T42.
Kevin Kisner, Billy Horschel and Matt Jones are all relatively safe picks but the guy I love is Cameron Davis. He finished T10 last week and he's just the mercurial type you want in this event because that's who usually wins it. Sheet, Kevin Na took two years off after a missed cut in 2018 before winning it last year.
My bottom four have all shown some level of consistency here which is apparently tough to do as evidenced by the slew of MC's and DNP's that riddle my pretty chart below. You know it's bad when Sungjae Im has played three years in a row and finished no better than T16.
One and Done Pick: Corey Conners
Other Guy I'd Pick: Webb Simpson
Sleeper Pick: Hudson Swafford
DraftKings Top Ten Values
Let's hope we don't have to name every chart this year after a brilliant comedian but we're off to a rough start. If you only know Bob Saget from Full House or America's Funniest Home Videos or you don't know him at all, I'd encourage you to watch this clip of his performance at the 9th Annual HBO Young Comedians Special.** I'm not sure anyone has ever pulled-off this level of dork/dirty combination. I saw this for the first time 36 years ago and remember almost every line of it today.
THE BOB SAGET MEMORIAL
HISTORICAL PERFORMANCE CHART
I wouldn't rule-out Tom Hoge and Brian Stuard as Sunday contenders based on their past performances though that duel would have ratings somewhere between a rerun of AfterMASH and a Wednesday afternoon Orioles game in September (or July for that matter).
Footnotes
* For those keeping track, since I reengaged with the greatest game ever invented about four years ago, I've broken my right hand, my left arm and three ribs. People ask me if it's worth it. A lot of people . . .
** We also met Louie Anderson, Rita Rudner and Sam Kinison that night. Man did we ever meet Sam Kinison . . . here's his set. I need to do a whole post on these HBO specials. I'm pretty sure they played a huge role in making me the prick I am today.
Email the Fantasy Golf Report at fgr@fantasygolfreport.com.
Posted by Ronny Elliott at 1:52 AM