The last time they played The Open at Royal St. George's was ten years ago when Darren Clarke beat Dustin Johnson and Phil Mickelson going away. It may be the most underrated of DJ's blown major opportunities as he was in the middle of the fairway on the reachable par five 14th just two shots back when he promptly blew a 2-iron out of bounds and made double bogey. That came on the heels of his minor meltdown at Pebble Beach and his bunker mishap at Whistling Straits the previous year. It would take him five years along with overcoming one more heartbreak and some ham-handed tournament officiating by the USGA before he'd finally break the curse at Oakmont.
So does that mean I like DJ this week? Um no. Really just more of an excuse to reference some past FGR brilliance. For this week's picks you'll have to read on.
TWEET OF THE WEEK*
I can live with the shorts and the Aviators but come on Phil. This ain't the Tuesday Men's Twilight Shamble at Clifton Park. 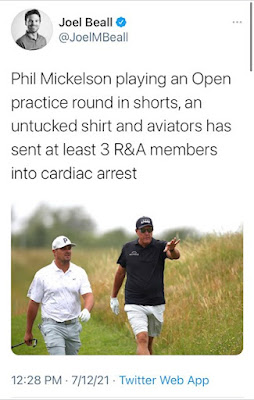 GOLF ANALYSIS THAT NOURISHES THE SOUL
It's the British Open and that means wagering and wagering means odds. According to Sports Betting Dime, U.S Open champ Jon Rahm is the prohibitive favorite at +800 and you know what that means . . . we're looking elsewhere. Especially when you can get over twice the value on Brooks Koepka (+1850) and Jordan Spieth (+2050). Here's our case for each of them:
Koepka: He's the best major player since Tiger Woods. By a lot. In addition to the four he's won, he's racked-up eleven other top 10 finishes since 2014 including three runner-ups in the last three years. Three of those top tens have been at the British. Apparently he doesn't give a rat's arse about conditions, course type or continent as long as it's a major.
Spieth: He's on a current run across the pond of T4-T30-Win-T9-T20 and, as you may have heard, that relatively steady run has occurred through a few peaks and valleys back home. He enters this week on a very solid eight tournament run including a win at the Texas Open, a runner-up at the Charles Schwab and a T3 at Augusta. If I had him available, he'd be the pick and Koepka would be #2. Man this feels like a really good place for a modified James Tolkan Top Gun quote but it's not quite materializing.
Beyond the favorites I'm gambling that Louis Oosthuizen has one more major run in him this year and, as the 10th ranked player in the world, it's time for Tyrrell Hatton to step-up and contend.
My Tony Finau logic is explained below along with the obligatory Bryson DeChambeau shot.
I'm convinced that either Adam Scott or Sergio Garcia has one more British Open run in them as they are probably the two players from the currently passing era who had the most opportunities to win it but didn't. Scott gave away his best shot at the Claret Jug in 2012 by closing with four straight bogeys to lose to Ernie Els by one. And Sergio let the 2007 title slip away to Padraig Harrington in a playoff after starting the final round six shots ahead of him. It was a classic Normanesque like clinic on how to play with the lead.
Matt Fitzpatrick just finished T2 at the Scottish Open, has all of the tools and I had him on my list until I looked at his lone top ten finish in twenty-five major starts so I'm switching to Cameron Smith. Can't really make a case for him as he's been struggling a bit and his record here is limited and unimpressive but you need at least one gut pick. (Yeah you keep telling yourself that every week friend).
The sleeper pick came down to Kevin Kisner and Lucas Herbert, neither of whom are bad choices but Herbert is one of the hottest golfers on the planet (Earth) having just won the Irish Open and backing it up with a T4 at the Scottish Open. You gotta figure he's going to play well at the next [blank]ish Open and that happens to be this week so there you go.
One and Done Pick: Brooks Koepka
Other Guy I'd Pick: Jordan Spieth
Sleeper Pick: Lucas Herbert
DraftKings Top Ten Values
I know they don't play the same course every year but there are clearly British Open guys and not British Open guys so we can still find value in recent performance. For example, Tony Finau appears to be a British Open guy because he's cool and Bryson DeChambeau is not a British Open guy because his parents named him "Bryson" and apparently made him watch a lot of Caillou** as a kid.
Other British Open guys include Rickie Fowler, Alex Noren and Matt Kuchar. Interestingly, Ian Poulter not so much lately.
THE DON'T SAVE YOUR MOST INEXPERIENCED
PLAYERS FOR THE END OF THE SHOOTOUT
HISTORICAL PERFORMANCE CHART (OUCH)
Footnotes
* It's British Open week so I felt the need to keep it golfy up top but oh my this might be the most FGR tweet ever. 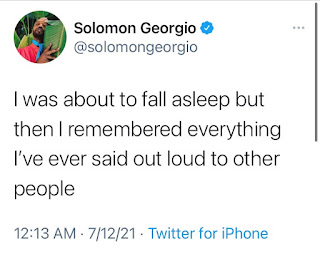 ** If you've never been subjected to Caillou, it's a Canadian cartoon for kids about a 4 year old who has you praying by the end of every episode that he gets trampled by a dogsled team.

Email the Fantasy Golf Report at fgr@fantasygolfreport.com.
Posted by Ronny Elliott at 9:01 PM