I was due for a stumble and, if you followed my advice last week, at least you didn't waste a Dustin Johnson or Brooks Koepka start. It must be noted, however, that I did pick Lucas Glover to win a golf tournament against professionals and for that my fantasy golf credentials were temporally suspended. Fortunately for all of us, my appeal will push that off until at least the week of the Olympics which will spare you having to hear me extol the virtues of Fabrizio Zanotti's short game. (It's sublime by the way).
TWEET OF THE WEEK
Apparently a bit of a scuffle broke-out at a Korn Ferry Tour qualifier this week. Suffice it to say that if I am Player A in this scenario, Player B's dad is going tail over teakettle right into a very deep greenside bunker right after he decides to run his fucking yap (you have been warned . . . help people look for their damn ball). 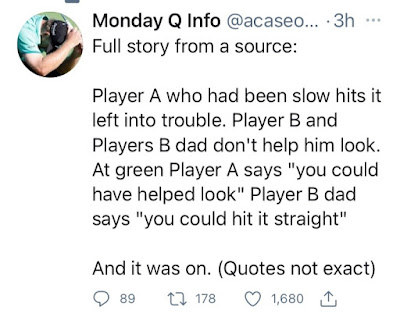 GOLF ANALYSIS FOR THE EASILY DISTR . . . HEY DID YOU SEE THAT?
As fate would have it, I still have Jon Rahm at my disposal after much waffling prior to The Memorial between picking him, Patrick Cantlay or Collin Morikawa (I picked Cantlay in case you hadn't heard). I therefore believe that destiny is calling along with Rahm's recent five year run at the Farmers Insurance Open of 1st, T29, T5, 2nd and T7. He claims to not have hit any shots during his time in isolation like I claim that Friends isn't one of my favorite shows of all-time so I think he'll be ready.
Don't discount the California effect. Some guys dig it and some clearly don't as evidenced by the fact that four of the favorites, Brooks Koepka, Bryson DeChambeau, Jordan Spieth and Justin Thomas, have combined to win one tour event there. ONE. (Spieth won the AT&T Pebble Beach Pro-Am in 2017). Apparently the greens roll funny which is undoubtedly related to all of the goddamn socialist vegan homosexualism they encourage and foster.
So who does play well in Libtardistan besides Rahm? Well the aforementioned Mr. Morikawa is from Los Angeles and won the PGA Championship in San Francisco. He's pretty good. And Xander Schauffele was born in San Diego, went to Long Beach State University and then transferred to San Diego State University which explains why he's always smiling. Oh yeah, he finished T2 here four months ago and no one in the history of golf has ever been more due to win a major considering he's finished top ten in eight of the sixteen he's entered.*
Tony Finau and Patrick Reed have track records at Torrey Pines almost as impressive as Rahm's and they present an interesting dichotomy because one is a tall lanky athletic guy and the other is a complete douche. Goes to show that there's more than one way to do it.
I literally just reshuffled the entire middle of my line-up after a third glass of wine while listening to the Velvet Underground so you decide how you feel about Corey Conners, Cameron Smith and Marc Leishman being unceremoniously dumped for Paul Casey, Sam Burns and Max Homa. I feel pretty damn good about it at the moment. Meanwhile, Jason Kokrak is a lead-pipe lock for a quality showing (things only wine-buzzed people say about guys who've never finished better than T17 at a major).
The sleeper crop is a little thin and by "a little thin" I mean "really fucking thin." I'm giving Ryan Palmer a slight nod over Kevin Streelman at the $7,100 level and Brendon Todd is the sub-$7,000 guy by default because I have no interest in the likes of Adam Hadwin (Canadian), Tom Hoge (name's too short) or Mackenzie Hughes (sounds like he plays the second footman on Downton Abbey). Maybe you could talk me into Martin Laird if I crack a second bottle of pinot noir. Maybe.
So that's the preview. Hopefully everyone who was annoyed by the recent lack of pop culture references and footnotes will now be satisfied and leave me alone. (I don't actually hope that).
One and Done Pick: Jon Rahm
Other Guy I'd Pick: Xander Schauffele
Sleeper Pick: Brendon Todd
DraftKings Top Ten Values
HISTORICAL PERFORMANCE CHART (SORT OF)
I know this isn't technically a "historical performance chart" because (1) they play one of the Farmers Insurance Open rounds on the North Course, and (2) it's not setup for a U.S. Open in February but it's no coincidence that the one major Tiger won on a broken leg was at a place where he also won the regular tour event seven times. No way that overplayed drama goes down at Bethpage or Oakmont. Just sayin'.
Footnote
* Sometimes I write things that make movie scenes suddenly appear in my head (sometimes?) and that one inspired John Cleese leading the posse in Silverado with the indelible line "You idiot . . . he's hit everything he's aimed at!" Not exactly sure where Silverado sits in the pantheon of modern westerns because it's got a hint of cheese ball to it and Kevin Costner chews-up a lot of scenery even by his own standards. It's probably somewhere just above The Quick and the Dead but just below Tombstone. I'll take 3:10 to Yuma over all of them and, if you let Hell or Highwater slide into that category, . . . case closed.
Email the Fantasy Golf Report at fgr@fantasygolfreport.com.
Posted by Ronny Elliott at 10:20 PM