No real broken arm update other than the fact that I am now almost adept at tying my shoes and picking my nose with the bad hand. So that's some progress which is good because I may have to play a golf match eight days after cast removal. "Competitive" country club golf can be pretty cut-throat. Oh and on a semi-related health note, the second Pfizer shot can feel like an unearned two day hangover. Headache, dry mouth and fatigue but at least with none of the remorse and lost apparel.

Ever since I designated Cameron Tringale as the FGR weather vane of above averageness, the guy has produced a T9 and a T3 jumping from 89th to 65th in the world. I may need to go in search of a new measuring stick but for now I'll ride with Tringale and his cool, almost content just to contend demeanor. Apparently I'm not alone in this assessment.* 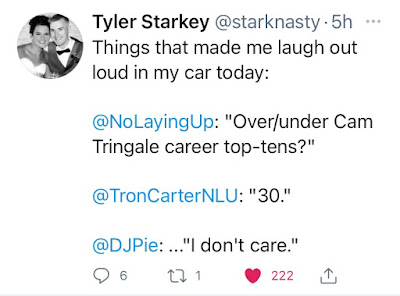 Mid-Post Footnote (A thighnote?)
* I believe this tweet is a reference to the No Laying Up podcast. I don't listen to golf podcasts because they are inevitably eight minutes of worthwhile content spread over ninety minutes with the balance of the time being filled with ads and golf banter that generates a 5:1 groan to laugh ratio. I try to keep these previews brief in an effort to lower that ratio to 4:1 (though that "thighnote" joke).
A FEW WORDS ON OUR GOOD FRIEND PATRICK REED
Patrick Reed provided me with my annual reason to continue despising him by missing the cut last week. And that was before reading what appeared to be an effort at image rehabilitation in Golf Digest that managed to step on every rake in the yard.

Q: You’ve given to charities with the express desire of not being found out. I’ll put you on the spot to tell us what causes and why?

A: If I’m going to help a person but broadcast it over social media, it looks like you’re trying to get a gain out of it. Junior golf, homeless shelters, disaster relief funds, Ronald McDonald, cancer centers, veterans, the list goes on. (Emphasis added for douchy effect).

I guess why people don't like him will just remain one of life's great unsolved mysteries.
GOLF ANALYSIS FOR THAT SPECIAL SOMEONE IN YOUR LIFE
I'm going to hold my nose, close my eyes and down all of the shitty medicine for the year in one two week dose. Bryson DeChambeau hasn't played since yet another embarrassing performance at Augusta and you know he's out for retribution from those who dare to judge him for being exactly who he is. Not to mention, he finished T4 here the last time he played.
I wrestled with putting Rory in the second slot. If he's going to bounce back anywhere, it will be on a course that he prefers in a tournament with moderate significance so I'm taking a leap of faith. You wouldn't hurt my feelings if you went with Webb Simpson or Viktor Hovland there. It's a home game for Simpson, though that home course advantage thing is a bit of a myth as I prove on a regular basis.
The rest of the picks are a bit of an eclectic mix to suit the randomness of outcomes this tournament produces. Max Homa, Jason Day, Brian Harman, James Hahn and Rory are quite the hodgepodge of winners and I wouldn't be the least bit surprised to see a Talor Gooch or Lanto Griffin join that crew. Hopefully we get a flash of Phil Mickelson on the leaderboard this weekend to keep it interesting because I'm not sure a Gooch/Griffin duel down the stretch is going to hold my attention. (See for example Burns v. Bradley, circa last week).
One and Done Pick: Bryson DeChambeau
Other Guy I'd Pick: Talor Gooch
Sleeper Pick: Phil Mickelson
DraftKings Top Ten Values
THE SECOND SHOT BAD BOOZE EFFECT
HISTORICAL PERFORMANCE CHART
One might think that with how much the players say they love this event, more good ones would finish in the top ten but one would be wrong. It should be noted that, in addition to his two recent T4's here, Rickie Fowler is the 2012 champion. And so it has been noted.