Last week a writer who bears a striking resemblance to yours truly wrote the following . . . "the rest of the picks are either Texans, guys who play well in Texas or K.H. Lee." Said writer then proceeded to not pick K.H. Lee in any gambling format. For those who don't follow golf as closely as they should, K.H. Lee won the tournament. Said writer was disappointed and found himself lamenting "why does this keep happening to me?"

Well the answer is probably a combination of attention deficit disorder, alcohol and the malfunctioning 5G tracking chip I recently had inserted into my left shoulder (twice). On top of that, consider that I picked Scottie Scheffler for the second time in six weeks because I forgot to gamble on him the first time I picked him. The lesson as I always is do as I say . . . not as I do and, in the land of the blind, the one eyed man is king. So listen to the one eyed man. Just don't do what he does. Or something. Let's move on.

From now until the end of time there will never be anything written that more accurately describes me than this (everyone who has ever been the dude riding shotgun nods in unison). 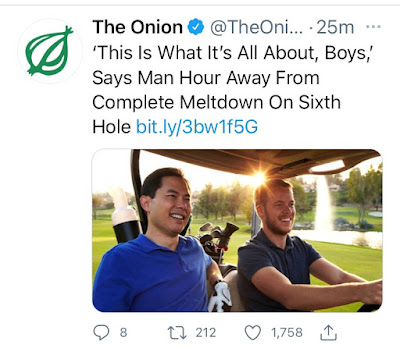 GOLF ANALYSIS FOR AN ENTERPRISING YOUNG PERSON LIKE YOURSELF
We don't have a lot to go on this week considering they haven't played at Kiawah since 2012 when a still precocious Rory McIlroy overwhelmed the course and won by 8 shots. To the extent there were any legitimate chasers, they didn't fit any consistent profile. You had everyone from Ian Poulter to Keegan Bradley in a top ten that also featured Justin Rose, Steve Stricker and otherwise mostly "B" list actors.
Here's one thing we do know. Kiawah will take a big bite out of even the top finishers for at least one round. Rory shot 75 in the second round while Bradley and Rose finished tied for third even after posting a 77 and a 79 along the way. I guess that's a testament to patience and perseverance (slowly backs away from Jon Rahm).
Fuck it. Rahm is the one and done pick (maybe) but I don't really love any of the top shelf guys so I'd spend most of my resources in that $7,600 - $9,600 range. Schauffele and Hovland are flat-out steals as is Leishman. I mean Schauffele is getting to the point where you just bet him heavy in every major until the inevitable happens. And Matt Kuchar at $7,000? Fuhgeddaboudit. That's less than he tips on a win in Mexico. Heyoooo!!!!
The balance of the picks tilt towards Brits and South Africans as we've been knee deep in American major winners since 2014 with the homeboys winning 17 of the last 24. We're due for an international run and, if it's not a Louis Oosthuizen or Matthew Fitzpatrick, it could be a Cameron Smith or Tyrrell Hatton (hmmm Tyrrell Hatton . . .).
And that brings us to Abraham Ancer who has that "top five in a major from a guy that the announcers will tell us over and over again that no one has heard of before even though he played in the 2019 Presidents Cup"  vibe. Just have a gut feeling about him. Will I bet on him? Probably not.
One and Done Pick: Jon Rahm
Other Guy I'd Pick: Xander Schauffele
Sleeper Pick: Matt Kuchar
DraftKings Top Ten Values

Posted by Ronny Elliott at 9:31 PM