Hey I’m back on a plane heading home two days early so that my son won’t miss the start of tryouts for a soccer season that probably won’t even happen. I’m sitting in the back of the aircraft thanks to Southwest’s decision to delay the flight 30 minutes but board as if it was on time thereby negating the effect of my A-List status. There is currently a dog barking and the large man two seats over just settled-in by lifting his shirt above his prodigious belly. So goes life in steerage.
At least I’m not hungry as we took the “extra” time to spend $100 on a hamburger, a club sandwich and a beer which we choked-down at the San Juan Airport's only full service restaurant (at least on Concourse B) . . . fucking Margaritaville. You have to give Jimmy Buffet credit. He has maximized the profit from his marginal talent better than anyone since the guy who originally painted dogs playing poker.
Oh hey a crazy lady just went running down the aisle, cracked her knee on an armrest and hit the floor. Hard. Now she and her male companion are in the back asking for alcohol despite it not being displayed anywhere on the laminated card which basically said, "you can have any of these five fucking things and none of them are alcohol . . . asshole."
TWEET OF THE WEEK

This is a brilliant observation of arguably the two most iconic characters of our time. 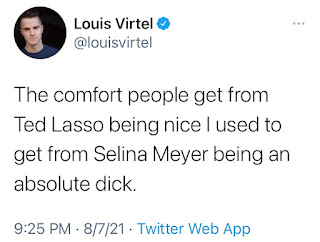 I’m not exactly sure how to react to last week’s outcome. I backed myself into a corner where I was forced to choose between Billy Horschel and Harris English. Somehow I managed to actually win that coin-flip only to see English implode on the back and finish 4th despite only needing to shoot +3 over the final nine holes to win. Fortunately I was spared actually witnessing the meltdown because YouTube TV is only available in the United States. Sorry Puerto Rico. Maybe come back tomorrow.

(And sorry for the shit writing but the lady next to me is encroaching so far past the armrest that I can't reach the left side of the keyboard).
I understand, however, that English got stuck playing with the dildo in the stupid hat whose slow play led to warnings which put the leader on tilt. I knew that asshole had to have something to do with it. Anyway, the 4th place finish combined with Brooks Koepka's T54 propelled me back into first place so mission accomplished for the week and I'm now one-step closer to winning enough money to buy everyone currently reading this a low-end toaster.
(I just finally threw the penalty flag for encroachment and the tone with which armrest lady explained what happened in heated Spanish to belly guy would lead me to believe that I better haul ass up the jetway and not look back).
This week I'm picking Webb Simpson for obvious reasons (see below). This is such a slam dunk lead-pipe lock that he's sure to finish T65. If that troubles you like it does me, I'd go with Jason Kokrak or Sungjae Im. The rest of the picks are all defensible. Trust me.
One and Done Pick: Webb Simpson
Other Guy I’d Pick: Brian Harman
Sleeper Pick: Ryan Armour
Draftkings Top Ten Values
See below for the justification of my Armour and McCarthy picks. If you need more than that, I can't help you. Because I'm very tired.
THE CHEESEBURGER IN PARA . . .
OH GO FUCK YOURSELF JIMMY
HISTORICAL PERFORMANCE CHART
Email the Fantasy Golf Report at fgr@fantasygolfreport.com.
Posted by Ronny Elliott at 7:47 PM