This week the tour travels to Orlando to pay tribute to arguably its coolest icon.  Arnie's resume of seven majors and one U.S. Amateur title puts him solidly in the second tier of all-time greats with guys like Watson, Player, Hagan, Jones, Hogan, Sarazan and Snead (the top tier is the exclusive domain of Jack and Tiger).  But it wasn't just his game that made him the legend he is, it was the fact that he was the first player to capitalize on the advantage that golfers have over other athletes which is that you get to see them performing solo on a stage like a rock star.  (Tennis is the next closest thing but no matter how appealing you find Centre Court at Wimbledon, it ain't Augusta National).

Palmer and an agent named Mark McCormack were realized that if you combined that visibility with a good looking, charismatic, risk taking player, you could probably reach an audience that included people who couldn't get into Bushwood.  Palmer's popularity ultimately grew so far beyond the game of golf that Hertz paired him up with one of the most beloved football players of the time in a series of commercials that were immensely popular (Arnie and the Juice  - "I know.  Let's cast O.J.  Everybody loves O.J.  What could go wrong?")  This all may explain in part why Tiger takes Arnie's tournament so seriously (he's won it six times).  He and Phil Knight owe him a lot for loosening the top of the jelly jar.  (Mmmm . . . jelly).

Thanks to Palmer's name on the trophy, this tournament has a very solid field that puts it on a level just below The Players or a WGC event and it has its share of past champions big time enough to have first name only recognition - Tiger, Ernie, Vijay, Freddie, Fuzzy and Phil.  (Tim Herron also won it but throwing the name "Lumpy" in there would kind of screw-up my premise).  We're going to stick with that theme this week and put Bubba at the top of the list.  Here is how the rest of it shakes out:

The eight players I am holding-out for the majors remain unchanged but Justin Rose is getting very close to bumping someone off of this list:

The One and Done Top Five: 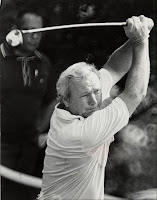 It's a fine line between a player on a roll and a player on the verge of getting burned out.  Just ask everyone who picked Charl Schwartzel last week.  (He missed the cut by 8 strokes right after I called him the second best player in the world.  Sheesh).  The key appears to be avoiding players coming off two Top 10's in a row because (a) it's just too tough to keep playing at that level and (b) the depth of talent right now is absurd so the odds dictate that we're going to see a lot of turnover at the top of the leaderboard from week to week (case in point: Rose, Schwartzel and Hanson at the Transitions).  Bubba's on a roll and looks more hungry than burned out to me as evidenced by him barking at his caddie for a bad read at the Tavistock Cup.  Besides, he's destined to win the tournament hosted by the guy who had to be at least part of the inspiration for his golf swing.
Posted by Ronny Elliott at 11:30 AM