This is going to be a bit of a light preview which is really kind of pathetic considering I had all weekend to work on it while accomplishing little more (a) than playing nine holes in a simulator (and losing), (b) watching the Pete Davidson movie (solid if not spectacular except for Bill Burr's moustache) and (c) getting two new tires for my car.
It's not even like I put the tires on myself . . . an idea even more preposterous than me say building a treehouse or welding whatever it is that people weld. I am not what you would call "handy" and never have been. I remember watching The A-Team as a kid and in every single episode they would weld things like the parts of an old hibachi together to make a helicopter or a tank and I distinctly remember feeling a sense of awe and thinking to myself "you will never be able to do that."
TWEET OF THE WEEK
I resisted the urge to include a Ted Cruz tweet here because no one needs more Ted Cruz in their life and besides, Max Homa's win was good for America. So let's celebrate the shot that won it for him with a picture of a coked-up Chevy Chase from his most underrated performance. 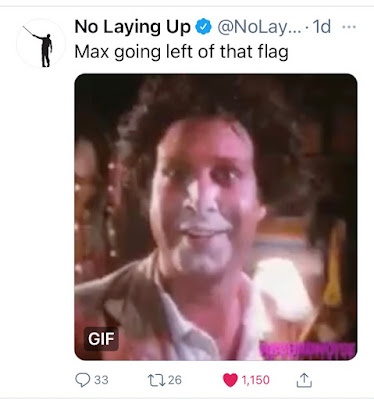 I love it when they play a new course because we're all guessing blindly as opposed to just guessing wildly. With no really strong feeling about any player this week, I'm going with Viktor Hovland who has been playing great and is still the guy from this current youth movement who I think is going to have the best career. The fact that he is paired with Patrick Reed and Bryson DeChambeau on Thursday and Friday gave me serious pause because that sounds more like the sentence you would get for committing a realtively serious misdemeanor but, if anyone can handle it, it's the perpetually upbeat Hovland.

Most of the rest of this week's picks are based on the theory that guys who generally play well in Florida will play well this week because the course they are playing is located in Florida. I did some casual research and most of the players on the list below have won in Florida plus Billy Horschel lives there across the lake from my friend's mother in-law's house (and yes I stared at it the one time I was there going "I wonder what Billy is doing right now"). I hope that helps. Good luck.

Email the Fantasy Golf Report at fgr@fantasygolfreport.com.
Posted by Ronny Elliott at 9:39 AM

It’s fascinating to think about this malfunction. As possible find, movers Adsense with regard to Content material, which in turn describes that specific advertisements becoming around the websites in which you’ve composed articles, is actually shown initial. In this article you will observe the volume of article thoughts indexed by the first column. When a page opinion is mostly exactly like the web site look at, that is definitely not necessarily always the case. To get a more detailed distinction of an internet page impression, notice Yahoo Adsense assistance, check out The Adsense Consideration after which mouse click on A person’s Adsense Article. gay romance kindle books